Scores at the first commercial break (after clue 13):

Scores at the end of the Jeopardy! Round:

Scores at the end of the Double Jeopardy! Round:

[wagering suggestions for these scores] 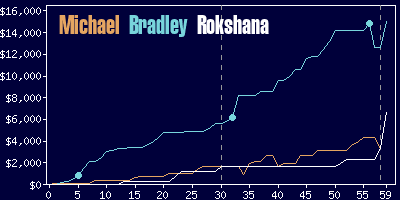 The J! Archive is created by fans, for fans. Scraping, republication, monetization, and malicious use prohibited; this site may use cookies and collect identifying information. See terms. The Jeopardy! game show and all elements thereof, including but not limited to copyright and trademark thereto, are the property of Jeopardy Productions, Inc. and are protected under law. This website is not affiliated with, sponsored by, or operated by Jeopardy Productions, Inc. Join the discussion at JBoard.tv.